Moved from d0cs4vage.blogspot.com to here

This is an expanded and improved version of a talk I gave at the last AHA! meeting here in Austin. My slides for that talk can be found here

Recently I’ve been working on my windbg extension, narly (update now here). Part of my intended purpose for it is to be able to search for ROP gadgets, but to do that I needed to find a disassembler that I could use. I couldn’t use the disassembler available through the windbg extension API, since the only thing you can do is call IDebugControl::Disassemble, which just returns a string of the disassembly. I could have used a number of other open-source disassemblers, but decided to reinvent the wheel and write my own. A lot of people would groan at the thought of reinventing the wheel, but I usually enjoy it since it’s one of the best ways I learn.

I’ve been coding my disassembler straight from the Intel® 64 and IA-32 Architectures Software Developer’s Manual: Volume 2A: Instruction Set Reference, A-M and Volume 2B: Instruction Set Reference, N-Z. Reading through specs that define how things are supposed to behave is always interesting, because you start to understand some of the boundaries/corner cases and see ways that some potentially interesting behaviors might occur. This blog post is about some interesting techniques I’ve come across to represent the same instruction in multiple ways (using a different set of bytes to do the exact same thing.) Note that I’ve only been able to test this out on Intel processors.

To understand most of what I’ll be talking about, you’ll have to somewhat understand the parts of an x86 instruction, as well as the “rules” that go with them. Once I go over the “rules”, I’ll then explain the ways I’ve come up with to represent the same instruction using different sets of bytes, both by following the rules and by breaking them.

An x86 instruction is made up of several parts:

Prefixes are bytes that precede the opcode and modify the meaning or action of the instruction. A single instruction can have up to four separate prefixes (one byte each). Prefixes can be arranged in any order. Below is the list of available prefixes:

*for use only with Jcc instructions

The intel manual says “it is only useful to include up to one prefix code from each of the four groups”. This means that an instruction like the one below shouldn’t “be useful”, since the lock and the rep prefixes are both from the same group:

Below are some examples of the affects prefixes have on instructions:

An opcode is the core of an instruction. Everything else is supplementary to it. An opcode can be up to four bytes long, and might include a mandatory prefix.

Each opcode determines how its operands are encoded. For example, an opcode might use the modR/M byte, modR/M and sib bytes, or modR/M byte and displacement,

or add a register index to the opcode:

The modR/M byte is made up of three parts:

The modR/M byte uses either a 16-bit or 32-bit addressing mode. The 0x67 prefix (operand size override) switches the addressing mode from 32 to 16 bit.

Depending on the value of the r/m part of the modR/M byte, the sib byte (32-bit addressing mode only) or a displacement (16 or 32) may also be required. Also, if there is no second operand, the reg/opcode part may be used as an opcode extension.

There are two tables that define the meaning of the modR/M byte, one for each addressing mode: 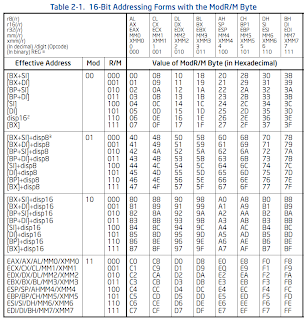 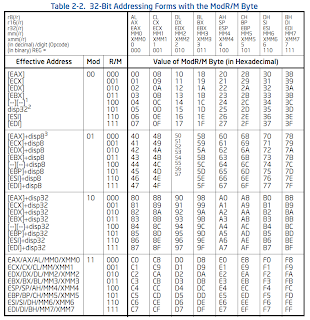 Below are examples of different ways the modR/M byte might be used:

The sib byte is only required when the “Effective Address” column in the 32-bit modR/M table has a value that looks like [--][--].

The sib byte has three parts:

This byte is used to make instructions behave like this:

The sib byte’s meaning is defined by the table below: 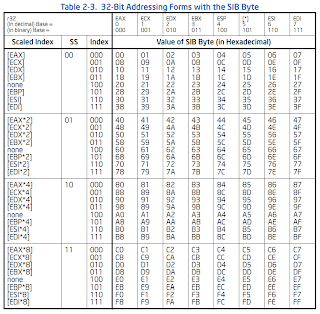 Some examples on using the sib byte are below:

The immediate value of an instruction is very simple, so a few examples should suffice:

If you take another look at the 16 and 32-bit modR/M tables, you’ll notice that when the mod part is 0x3 (binary 11), the operand is not dereferenced. This can be used to create another representation of an instruction:

In the sib table, you’ll notice that whenever the index part is 0x4 (100 binary), that a scaled index isn’t used. This can also let us make multiple representations of an instruction:

Now is where we start going into undefined territory.

Certain prefixes are only supposed to be used with certain instructions, and certain prefixes only make sense to be used when certain types of operands are used. For example, if a modR/M byte isn’t used, the 0x67 prefix doesn’t always do something:

However, sometimes the 0x67 prefix does do something without a modR/M byte (thanks to MazeGen in the comments):

The 0x2e and 0x3e (branch taken/not taken) prefixes are also intended only to be used with Jcc instructions. If they are used with another type of instruction, what happens? You guessed it, nothing:

There is a caveat to using 0x2e and 0x3e as “nop” prefixes. If the instruction dereferences something, then the 0x2e or 0x3e prefix will then be used as a CS or DS segment override:

One other prefix that can potentially be useful is the lock prefix (0xf0). The lock prefix can only be used with the add, adc, and, btc, btr, bts, cmpxchg, cmpxch8b, dec, inc, neg, not, or, sbb, sub, xor, xadd, and xchg opcodes, and then only if the dest operand is modifying memory. What does it do though? According to Intel, the lock prefix “forces an operation that ensures exclusive use of shared memory in a multiprocessor environment”. Besides the restrictions on which instructions and types of operands it can be used with, the lock prefix can also be used to create another representation of an instruction.

If you take a look at this in windbg, you’ll notice that it doesn’t know how to disassemble the instruction. I’m assuming this is because windbg thinks that only one unique prefix is allowed per instruction:

Even though windbg doesn’t know how to disassemble it (haven’t tested olly or ida yet or other debuggers), the instruction still executes just fine. This also goes for the lock+rep prefix combination example that I used earlier.

Being a bully times 14? No way, you say. YES WAY. I decided to test the “rule” about having only four prefixes. It’s a lie! In my testing, I was able to add up to fourteen prefixes before I started getting errors. Below are some examples:

I did some additional testing on these extra prefixes, thinking that maybe anything before the last four prefixes don’t get applied and can be any prefix, regardless of the compatability. It turns out this is not the case. All of the same rules still apply to all 14 prefixes.

Crazy stuff, huh? The biggest thing I learned from this is to question everything. I’m not used to having to question my disassembler too much. That’s something I’ve been able to trust up to this point, at least for disassembling one_instruction. I almost missed seeing most of this behavior because the first few times I saw windbg fail to disassemble a single instruction, I thought it meant that it wouldn’t execute. Luckily, I stepped (a literal hit-F10-and-execute-the-next-instruction step) through it anyways and noticed this behavior.

One other thing to note is that this isn’t the first time somebody has run across the multiple-prefixes behavior. A quick conversation with Mark Dowd made it apparent that this behavior is pretty well-known, that different processors may allow even more than 14 prefixes, and that there are major differences in how emulators and native clients execute instructions.

I have other ideas for some more potentially interesting research in this area, but this is all for now. Laters.